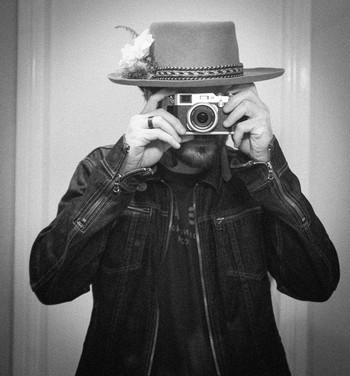 From 2010 to the band’s final tour in 2017, Andy was the official photographer and documentarian for Tom Petty & the Heartbreakers. His photography and short films documenting the 2010 Mojo Summer Tour helped earn TomPetty.com a Webby Award nomination. Andy’s photos are featured on several Tom Petty & the Heartbreakers official releases, including Kiss My Amps (2011), Kiss My Amps, Vol. 2 (2013), Hypnotic Eye (2014) and the American Treasure box set (2018).

Andy has also been a frequent contributor to Tom Petty Radio on Sirius XM, serving as a guest deejay. For the 40th Anniversary tour, he created and produced “The Road Report,” a weekly show aired on Tom Petty Radio that provided regular updates from the 2017 tour including fan, band and crew interviews.

In 2014, Andy made his directorial debut collaborating with Hard Working Americans on a music video for "Blackland Farmer" off their critically acclaimed debut album. In 2011, he helped conceive, plan and co-produce "Mike Campbell: The Guitars" – a 15-episode web series on the legendary Heartbreaker’s guitar collection - with director Justin Kreutzmann. The following year, Andy was part of a team assembled by TRI Studios to document Pete Townshend’s book tour for Who I Am, the legendary Who guitarist’s autobiography.

Andy lives in Winston-Salem, NC with his wife, two kids and a dog named Mildred.